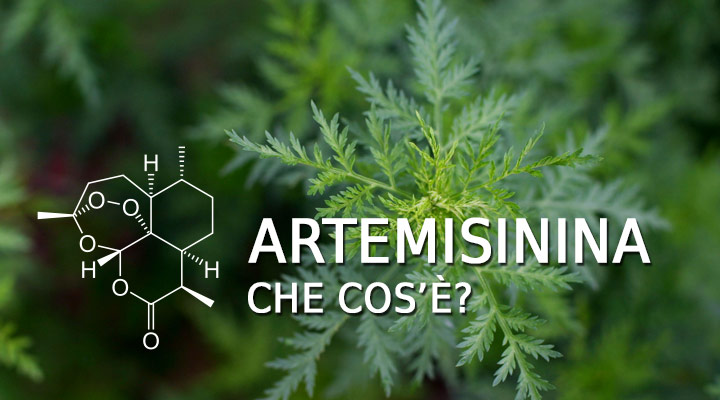 The active ingredient artemisinin extracted from the plant, Artemisia annua . It is a highly oxygenated sesquiterpene lactone, containing a unique 1,2,4-trioxane ring structure; this natural product is used in the fight against malaria and therefore falls into the category of antimalarials .

It has a relatively low toxicity in humans, even if undesirable effects have also been reported of considerable entity, especially related to prolonged administration with defects in excretion (in fact, the current knowledge on neurotoxicity, embryotoxicity, genotoxicity, hemato-immunotoxicity, cardiotoxicity, nephrotoxicity is underlined , and allergic reactions) and is activated by heme and / or intracellular iron leading to the formation of intracellular free radicals .

Its very powerful action is linked to the chemical structure that binds intracellular iron . The mechanism of action, different from other antimalarials, makes it a drug free of drug resistance .

There are also derivatives, di-hydro-artemisin, artemether, artesunate, which have a different route of administration (oral, intramuscular, intravenous).

Artemisinin and its derivatives are attracting much interest in research for their ability to selectively eliminate cancer cells . Interestingly, the artemisinin dimers exhibited more potent anti-cancer activity than the monomer form.

Intracellular iron uptake is regulated by the transferrin receptor (TfR), and the activity of artemisinin depends on the availability of iron.

Artemisinin contains an endoperoxidase moiety which can react with iron to form cytotoxic free radicals.

Cancer cells contain significantly more intracellular free iron than normal cells and artemisinin and its analogs have been shown to selectively cause cell growth arrest and apoptosis in many cancer cell lines.

Furthermore, both artemisinin and its compounds have been shown to have anti-angiogenic effects, disruption of migration, modulation of the nuclear receptor response, anti-inflammatory, anti-metastatic and perturbation of many signal transduction pathways.

However, simple artemisinin analogues are less potent than traditional cancer chemotherapy agents and since it has a short plasma half-life, this would require high dosage and frequent administration to be effective for cancer treatment.

More potent and selective target artemisin compounds are under development. These include artemisinin dimers and trimers, artemisinin hybrid compounds, and artemisinin compound tagging molecules that are involved in the intracellular iron delivery mechanism.

The action of artemisinin has been studied on many cell lines (prostate, ovary, colon, leukemia, melanoma, pancreas) and in xenograft animal models (demonstrating in this case a reduction in volume and diffusion).

Finally, ART and ATM have been combined with the common anti-cancer agents oxaliplatin, gemcitabine and thalidomide. In vivo and in vitro studies have shown, among other things, a better synergistic action when in association with flavonoids.

In addition, 2 patients with recurrence of poly-treated uval melanoma who responded positively with the combined use of chemotherapy and artemisinin were also presented.

The main side effect reported in numerous clinical studies in large animals was neurotoxicity . By comparing the data, links with dosage, method of administration and time of administration are highlighted. Therefore, the dosage must not be prolonged over time (3-5 days per cycle) to avoid the aforementioned effect.

This molecule should have a greater space for research and application in the oncology field, also because it could be one of those drugs to be used in combination with classic antiblastic drugs with the aim of increasing not only the efficacy, but also the survival of cancer patients. .

This brief insight into the therapeutic implications of Artemisinin was made possible by evaluating the data collected from numerous publications on the subject: